Things are looking up for Huawei despite the best efforts of the US government.

The Chinese telecoms company posted a 39% jump in first quarter revenue and reported a profit margin of about 8%, slightly higher than the same period last year.
Huawei attributed the jump in revenue to a continued focus on fast-growing areas of its business such as smart devices, and a push to streamline its operations.
It has been on the defense recently. For months, the United States has been trying to persuade other countries not to allow Huawei equipment into next-generation 5G wireless networks because it claims the gear could be used by Beijing for spying.
Huawei, which strongly denies those accusations, on Monday touted significant strides in its telecom equipment business. As of last month, it had signed 40 commercial contracts for 5G with leading global carriers, and had shipped more than 70,000 5G base stations around the world, it said in a statement.

For comparison, Ericsson (ERIC), one of Huawei's closest competitors, told CNN Business it has announced 18 contracts for 5G deployment, and shipped 3 million base stations with hardware that can be upgraded for 5G use.

Huawei also notched a new technical milestone this week, announcing that it had made the world's first 5G telematics module for cars and deployed the first 5G-enabled access point for Wi-Fi 6, a new standard of wireless internet that can quadruple a network's bandwidth.
The next generation of super-fast wireless services is shaking up the telecommunications industry. Analysts say that Huawei has built a leading position by making strategic investments in all areas of 5G, from smartphones and computing chips to artificial intelligence and cloud networks.
"5G is coming faster than many companies have expected," said Charlie Dai, a principal analyst at Forrester. "This business performance is significant, especially considering the challenging global economics, macroeconomics and political environment, which further proves that Huawei is one of the leaders in [the] global 5G market." 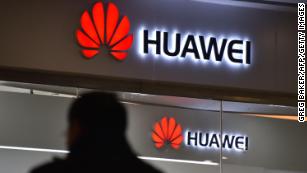 Monday was the first time that privately-held Huawei has released a quarterly financial report, leading some to suggest it was a sign of the Chinese tech giant's efforts to be more transparent.

Apart from 5G, Huawei appears to be maintaining a solid position in its consumer business, too.
In the first three months of this year, the company said it shipped 59 million smartphones — its strongest first quarterly performance and a "solid start" towards an internal target to sell 250 million smartphones a year, said Mo Jia, an analyst at Canalys who focuses on smartphone research. 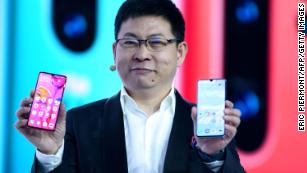 Huawei has repeatedly stated its goal is to overtake Samsung, the world's top smartphone seller, by 2020.
It might not be so easy. The South Korean company revamped its product strategy late last year, making it more competitive with players like Huawei, said Jia.
There are still "major risks for Huawei's performance in the future," he added.